As the series ended, there are only three members of the Jyushinshuu alive: Neon, Raiha and Rasen. In the anime, Rasen never appeared, as he only debuted in the Sealed Lands arc of the manga, where the anime didn't go to it ended with Ura Butou Satsujin. Sign In Don't have an account?

Start a Wiki. While they all serve Kurei some members of the Jyushinshuu are not loyal to Kurei at all but serves him primarily because they are not strong enough to beat Kurei, the best example would be Genjuro, who sought to kill him when the time arose. He is the descendant of certain Hokage ninjas who ran away during the war that ultimately destroyed the Hokage clan, and the reason why he is fiercely loyal to Kurei is because he believes that it is the only way he can repay the cowardice that his ancestors showed.

Joker Presumed Deceased, sucked into a black hole by his Taishaku Kaiten - Joker is a mysterious man who wields the Taishaku Kaiten, allowing him to manipulate gravity around himself. He allied with Kurei on the condition of being allowed to speak to him on equal terms, and come and go as he pleases.

Despite this, he apparently remains loyal to Kurei thoughout the series. He ultimately uses Taishaku Kaiten to suck both himself and Kadotsu into a black hole after being stabbed by the latter, and is presumed deceased. He also loses his blood when he erases the flame balls produced by Nadare during his battle against Recca. It is revealed in Episode 39 in the anime that he became a Jyushinshuu after Ganko and Koganei left the Uruha as the latter stated.

As a year-old teenage ninja, Recca Hanabishi has recently vowed to protect the life of a pretty classmate named Yanagi Sakoshita. With the power of flame at his command, the hotshot shinobi is not shy about roasting a punk or two over a roaring fire. But now, a battle-weary Recca finds himself grappling with someone known as "The Invincible One. 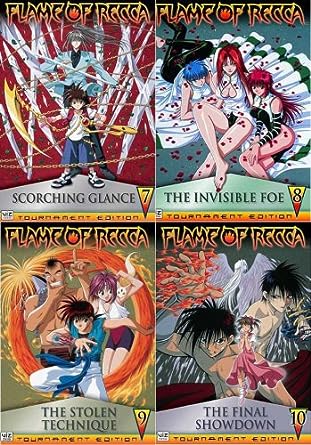